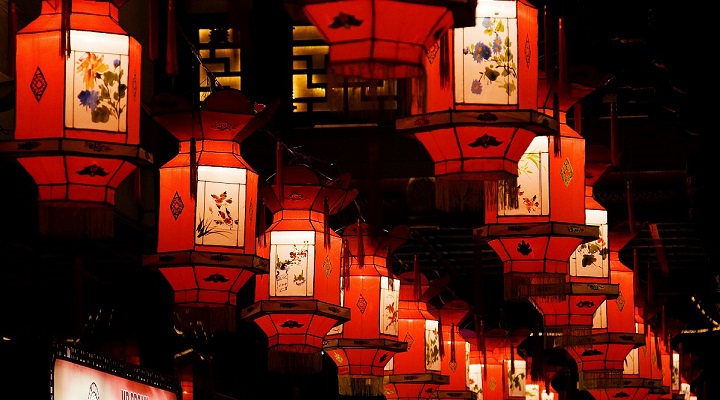 The Lantern Festival is a Chinese festival celebrated on the fifteenth day of the first month in the lunar calendar marking the last day of the lunar New Year celebration. During the Lantern Festival, children go out at night to temples carrying paper lanterns and solve riddles on the lanterns(猜灯谜cāidēngmí).

In the Han Dynasty, Dongfang Shuo was a favorite adviser of the emperor. One winter day, he went to the garden and heard a little girl crying and getting ready to jump into a well to commit suicide. Dongfang stopped her and asked why. She said she was Yuan-Xiao, a maid in the emperor's palace and that she never had a chance to see her family since she started working there. If she could not have the chance to show her filial piety in this life, she would rather die.

Dongfang promised to find a way to reunite her with her family. Dongfang left the palace and set up a fortune-telling stall on the street. Due to his reputation, many people asked for their fortunes to be told but everyone got the same prediction - a calamitous fire on the fifteenth lunar day. The rumor spread quickly.

Everyone was worried about the future and asked Dongfang for help. Dongfang said that on the thirteenth lunar day, the God of Fire would send a fairy in red riding a black horse to burn down the city. When people saw the fairy they should ask for her mercy.

On that day, Yuan-Xiao pretended to be the red fairy. When people asked for her help, she said that she had a copy of a decree from the God of Fire that should be taken to the emperor. After she left, people went to the palace to show the emperor the decree which stated that the capital city would burn down on the fifteenth.

The emperor asked Dongfang for advice. Dongfang said that the God of Fire liked to eatsweet dumplings(汤圆 tānɡyuán). Yuan-Xiao should cook tangyuan on the fifteenth lunar day and the emperor should order every house to prepare tangyuan to worship the God of Fire at the same time. Also, every house in the city should hang red lantern and explode fire crackers. Lastly, everyone in the palace and people outside the city should carry their lanterns on the street to watch the lantern decorations and fireworks. The Jade Emperor would be deceived and everyone would avoid the disastrous fire.

The emperor happily followed the plan. Lanterns were everywhere in the capital city on the night of the fifteenth lunar day. People were walking on the street. Fire crackers kept making lots of noise. It looked like the entire city was on fire. Yuan-Xiao's parents went into the palace to watch the lantern decorations and were reunited with their daughter. The emperor decreed that people should do the same thing every year. Since Yuan-Xiao cooked the best tangyuan, people called the day Yuan-Xiao Festival.
(Source: Wikipedia)

What Do Chinese People Eat in Summer?Chinese Tea Culture