How do Native Chinese Greet Each Other? 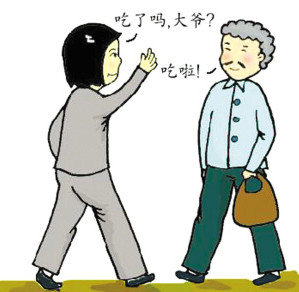 Are you saying “nǐ hǎo” to greet just about anyone you come into contact with? Yes, one of the first words that most people learn in Chinese is “nǐ hǎo,” which means “hello.” But “你好" and "你好吗?” are mostly textbook greetings and are not used by native Chinese on daily basis.

Chinese people don’t say “nǐ hǎo” when we are already familiar with each other. People are greeting each other in many other ways:

A very common way is to simply say someone’s name or title. It’s appropriate both for casual greetings as well as more formal greetings. If you want to greet the security guard as you come and go from your building, you can say “Wáng Shīfu”, which is like saying, “Mr. Wang.” When at work, you would always greet your colleague “Zhāng jīng lǐ-manager Zhang”, “Zhū Lăoshī- teacher Zhu”, “lǐ yī sheng-doctor Li”. People would respond in the same way or by simply saying“èi!”

One other greeting that’s commonly used is “zǎo,” which means “morning.” This is quite similar to what we do in English, using "Morning!" as a greeting instead of "Good morning!" You can say “Zǎo!” to just about anybody as long as it is before 10:00 in the morning or so.

When people are on familiar and casual terms with each other, one will often ask the other a simple question. For example, if you pass by a neighbor in the hallway and it’s around lunchtime, you might ask: Have you eaten yet? Chī fàn le ma? 吃饭了吗?Don’t be surprised if you are greeted this way when the timing is not applicable. And don’t consider this as a lunch/dinner invitation. It is just a greeting. Or, if two coworkers meet outside the office, one might ask: Where are you going? Nǐ qù nǎ lǐ? 你去哪里? It’s a greeting rather than an actual question, the response is usually very simple.  Even if you in fact have not yet eaten, it doesn’t matter. The usual response to the question “Chī fàn le ma?” is: Yes, I've eaten. Chī gùo le. 吃过了.

A parallel can be found with Americans: if someone asks, "How are you?" they don't expect any answer other than "Fine" or "I'm good" even if you're having a terrible day. The “Where are you going?” question is also not meant to be nosy, and can be met with a vague response, such as: I’m going out. wǒ chū qù yí xià. 我出去一下。

Actually we do this in English too, like when we say, “You’re up early!” or “Gorgeous day today!” You may hear people say “Huí lái le! 回来了！You’re back!” ““Chūqù le! 出去了！You’re going out!” “Tiān qì zhēn rè ā!天气真热啊！It's really hot! When someone greets you this way, you can simply grunt in response. That seems to be an appropriate acknowledgement and agreement.

Of course, it’s never really wrong to say “nǐ hǎo” to greet someone. Here are the times when we use it: When answering the phone; when meeting someone for the first time; when trying to get someone’s attention; when speaking to a customer. But, if you’re ready to take your Chinese to the next level, and want to sound a little less foreign, then try to use it less, especially with people you see often.