Micro Film Making with My Student

In June of this year, my colleague Julia and I filmed an advertisement for Flipped Learning Approach. The film-making was successful and unforgettable. One of my students named Claudia, an energetic housewife inSuzhou, likes learning Chinese and enjoys my class. She was invited to be the actress of the film.

One Tuesday morning, Julia and I went to Claudia’s home to film her studying Chinese at home. Although the weather was not nice, our mood was great and Claudia looked beautiful. We took the first scene in her balcony. Julia was the cameraman and I was the styling designer and script girl. There was a lot of interesting sidelight when we shoot it. 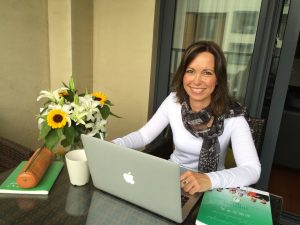 It was still raining, but it was bright in Claudia’s balcony. So we decided to film Claudia watching a Chinese video lesson there. It took us quite a while to decide where to put the sunflowers and lilies. We also moved the table and chairs to make it look perfect for the scene. When we finished the “Take One”, I found that it would be better for Claudia to wear a scarf for decoration. Everything was perfect now. I used the professional clap-stick and shout “action” before every take. It was very funny. Claudia was learning with her computer in her balcony, after five minutes, we finished the first shooting of the film. The film was a great success and we felt really satisfied with it.

After the first scene of the film, we had more experience than the beginning, so we started to shoot the second scene of film in Claudia’s study room. The plot of the second scene was Claudia studying in her office after she practiced with teacher in her Chinese class.

We wanted the study room to be more like an office, so we asked Claudio to decorate it. She also added some Chinese traditional elements for decoration. The shooting was also funny. In order to shoot from the top, Claudia brought a ladder to us, which was really helpful. It seemed that Claudia could bring you everything you wanted in just one minute.

We also took a video clip in Claudia’s kitchen as she really studied Chinese everywhere at her home such as when ironing the clothes and brushing eyelashes.

She wanted to make it look more real so she prepared some cucumbers to cut. It was interesting. She was watching video lesson and reading after the teacher while she was cutting the vegetables.

After hard work in Claudia’s home, we can have a rest before leaving .Claudia is really rigorous actress that more than we expected, she gave us a lot of surprising moments, we spent a nice half day in her home, it was memorable.

Three days later, we started to film Claudia studying in our Chinese class with me.

The plot of the third scene of film was Claudia practicing Chinese in our class. We were practicing bargain in Chinese. I brought some Chinese traditional decorations for this class, because we needed to use them in class. Julia shot it for us. She shouted “action” before we started. In our class, I taught Claudia two key sentences, which were “too expensive” and “cheaper a little bit”. Then I acted as the shop assistant while Claudia pretended to be the customer. It looked like that we were doing the conversation for real with the real money and real goods. She did not forget to say the script: I am able to bargain in Chinese now! 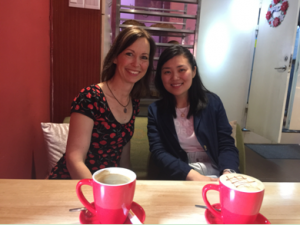 After shooting of classroom scene, Claudia started to take her routine Chinese course. At noon, we started to film the forth scene which was Claudia studying Chinese at bus stop, showing our students can study anywhere and anytime. Claudia changed a new outfit. I checked some details about her dressing, everything was prepared well before shooting. Then we went to a bus stop nearby our company.

Luckily at that time there were no people standing there. Otherwise Claudia might feel embarrassed. We chose a good place and a good angle for shooting. We wanted something like this: Claudia looked at the display board of the bus stop. She knew she still had plenty of time before the bus coming. So she decided to review the lesson when it was still fresh. She was sitting on the bench of the bus stop and watching her video course on her mobile phone. The shooting was successful and smooth. We just took one time. She performed perfect, because Claudia is smart and she has more performance experience now. We succeeded in performance and shooting, the outdoor shooting was accomplished.

After finishing the outdoor shooting, Claudia went back home. In the afternoon, she filmed by herself for the Skype course, which shows our students can study anywhere and are able to communicate and practice with Chinese teacher online instead of coming to our institute every time if they are really busy. Claudia put her mobile phone at a good shooting angle to record the scene of communicating

The shooting was completely finished. We waited for the post production. It took about one week. Finally we were able to see the final version of the video. We met up at a nice café. Julia showed us the video. We were so excited to see it and we laughed a lot when we thought of how we made these scenes.with Julia online. She was looking at her computer screen while she lying on her sofa relaxed. It was perfect in this shooting. For better post-production effects, she filmed some video clips for Julia to edit, such as she was smiling and saying something to the computer. She did several times, because it was really funny. And she could not help in laughing.

Claudia also showed the video to her friends, neighbors and family. They were surprised that Claudia became a “movie star”!

This demo video will be put on our website. More and more people will know more about how New Concept Mandarin Flipped Learning Approach can help them learn Chinese faster and easier.

A week later, the demo video went public. It was a great success. Some people even can recognize Claudia at shops. When people ask about the Chinese courses, Claudia is happy to recommend.

We made a toast for the success at the office after Claudia finished her class.

Claudia is still studying Chinese and she enjoys it even more as she is a great model among Chinese learners, which is a big motivation for her future study. I’m glad for my class and I’m proud of my good student.