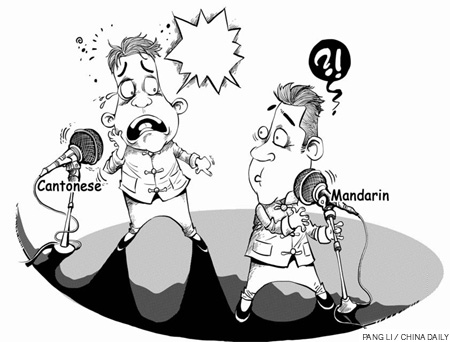 Mandarin is the official language of People’s Republic of China. Cantonese, named after the port city of Canton, now known Guangzhou, in southern China, is another language spoken in China. While Mandarin and Cantonese are often regarded as Chinese dialects because they share the same written form, linguists consider them separate languages because they are not mutually intelligible. Mandarin and Cantonese are different in terms of their sounds, complexity and usage.

The Chinese written language is based on characters rather than the Roman alphabet. When reading Chinese, the characters are pronounced differently under Mandarin and Cantonese. The meaning of the text remains the same. Thus, a Mandarin speaker and a Cantonese speaker can understand the same written text but cannot understand each other when speaking. For example, “thank you” in Mandarin is pronounced “xiè xie,” while in Cantonese it is “doh jeh.”

Both Mandarin and Cantonese are tonal languages. For tonal languages, words and their meanings are distinguished by pitch. A word can mean something completely different if spoken with a high rather than low pitch. Many people believe that learning Cantonese is harder than learning Mandarin because of its complex tone system. Cantonese has six to nine tones whereas Mandarin has four tones. While most words in Cantonese have one syllable, Mandarin frequently has words with three or more syllables.

As Mandarin is the Republic of China’s official language, all educated residents of China can understand and speak Mandarin. Mandarin is taught in the schools throughout the country. All official communication, including the news, is broadcast in Mandarin. While a Chinese person living in Guangzhou may speak Cantonese at home with friends and family, he or she may then speak Mandarin at work or school. Hong Kong, where school instruction and television programs are still in Cantonese, is an exception. Mandarin is also the official language of Taiwan and one of the official languages of Singapore. Cantonese is the second most spoken Chinese language behind Mandarin. In 1992, approximately 64 million people in the world spoke Cantonese. By 2010, it was estimated that 100 million spoke Cantonese. The majority of Cantonese speakers live in Guangdong province in southern China and Hong Kong. Cantonese is also widely spoken in Chinese communities in other Asian countries, such as Malaysia,Vietnam and Singapore, as well as parts of the United States, Canada and Australia. Chinese immigration across the world means that sizable Cantonese speakers can also be found in Latin American and European countries. Cantonese is actually the dominant language for many of these overseas communities because of the early and large flow of immigrants from Guangdong province and Hong Kong.